The Rituals of Tea

You just can’t sit down over a cup of tea without relaxing.  Of course, you can grab a bottled tea on the run, but we’re talking about a real cup of tea.

Carefully prepared, it causes you to wait for the water to boil, to wait for the tea to steep, to pull out a cup or mug with a bit more class and character than any old coffee mug.  And whether you are sitting down by yourself, say, in front of a nice fire curled up with a good book, or are joining with friends, you just naturally relax over a nice cup of tea.  It has ritual written all over it. 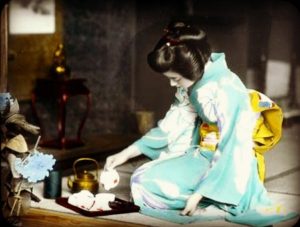 Taoists believe that beauty and harmony are achieved by order and ritual.  Ceremonial customs for drinking tea became a cultural phenomenon in the Orient.  The Japanese Tea Ceremony, which has been around for almost 500 years is an elaborate and ritualistic ceremony, called Chanoyu.  It can last for many hours and consists of elements such as silent walks through a tea garden, entering the tea house on knees, purification ceremonies, and eating a small meal and sweets.  The tea served is a bitter powdered green tea called matcha which is prepared with a bamboo whisk, and is passed with a bow from the guest of honor to each other guest in turn.

China, where tea originates, also has a tea ceremony, but, unlike the Japanese Tea Ceremony, it emphasizes the tea rather than the ritual.  Tea is such an important part of everyday life in China, that when you see someone on the street, before even saying ‘hello’, you say, ‘have you had your tea yet?’  Teas used in Chinese Tea Ceremonies are particularly refined, and you would not have them with food.  Some of these teas may cost as much as $200-$500 per lb. 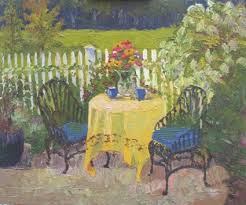 There are many rituals and ceremonies surrounding this amazingly simple drink, but in the West we are probably most familiar with Afternoon Tea. This tradition was first introduced in England by Anna, the 7thDuchess of Bedford, in the year 1840.  She became hungry around 4 o’clock in the afternoon, since the evening meal in her household was served fashionably late at 8 o’clock.  She asked for tea, bread and butter, and some cake to be brought to her room.  Soon, she began to invite friends to join her, and in a few years, the whole of England was indulging.  If you are interested in planning your own tea party click here for lots of ideas.

High Tea is served around 6 o’clock and is in reality a hearty evening meal.  It was started in England as a ploughman’s or workingman’s supper of strong tea served with ham, roast beef, leg of lamb, bread and butter, pastries, custard and cakes.  Many think that High Tea is the elegant tea and confuse it with the proper affair of Afternoon Tea.