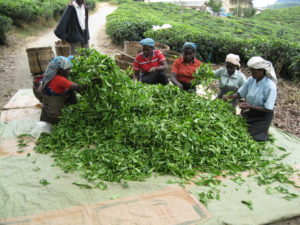 Tea grows best in warm, mountainous regions, and will grow at altitudes of up to 7500 ft. Teas grown at 5500 ft. and above are known as high growns, and typically produce the best teas which are bright, lightly astringent, and have a delightful, floral cup character. Medium growns, at 3000-5500 ft. produce some brightness and lively cup character, while low growns, below 3000 ft. brew a full bodied or thick cup with less. Tea Estates generally harvest tea in cycles, usually 4 times a year,

which are called flushes.  First flush, in early March, usually produces a very light, delicate drink. Second flush, in June, is from the second growth, and flavors are more complex than the first. First and second flush are generally considered to produce the best teas, but autumnal flush in mid-October after the rainy season may provide some high quality teas as well.

There are two main types of manufacture for black tea:  CTC and Orthodox.  From James Norwood Pratt’s Tea Dictionary:

CTC = “Crush-Tear-Curl”: A continuous machine process which shreds leaf into uniform particles and achieves quick, complete oxidation before firing. CTC accounts for most India black tea and is widely used in teabags. CTC process denigrates the inherent quality of the leaf but is less time and energy intensive than Orthodox Manufacture and results in a higher cup-per-pound yield. 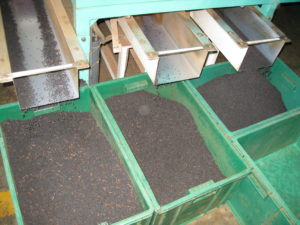 Traditional method of tea manufacture by machines which mimic by-hand methods employed in old China. In this process, each batch of leaf is withered and then put into rollers, which bruise and shape it prior to oxidation. Following oxidation, i.e. “fermentation,” the leaf is fired to arrest further chemical change and preserve it free of moisture and then is graded by leaf size. All of the world’s great black teas are produced by Orthodox Manufacture, which preserves the integrity and full flavor of the leaf. It is expensive and time-consuming compared to CTC manufacture.

Green teas are first withered, then heated by pan firing in large woks or steamed to prevent oxidation.  They are rolled into various shapes by hand and then dried for proper storage.

Oolong production is involved and the best oolongs are still produced in Taiwan by true artisans.  It takes many years of practice to be able to manipulate the leaf to bring out the best quality in an oolong tea.

White teas are usually air or sun dried and undergo the least processing, however some may be lightly steamed.  They are picked under strict conditions to control the moisture in the leaf.  They must be plucked by hand using only “two leaves and a bud”, or in the case of Silver Needle or White Tip teas, only the bud is used.