The history of tea is long and rich. Legend has it that tea was discovered in one of those ‘happy accidents’ by the Chinese Emperor Shen Nung and his entourage in the year 2737 B.C. While boiling his drinking water, some leaves from a large tea bush nearby fell into the water after a gust of wind. The aroma of the resulting brew captivated the Emperor so thoroughly that he demanded it to be prepared for him daily, and tea was born. 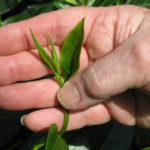 History over an almost 5000 year period does get a little fuzzy, and what we do know for sure is that Shen Nung was a Chinese Herbalist who tested many plants for their medicinal properties. From the History of Medicine Division of the National Library of Medicine on Shen Nung, The Divine Husbandman:

Considered to be the father of Chinese agriculture, this legendary emperor taught his people how to cultivate grains as food, so as to avoid killing animals. He is said to have tasted hundreds of herbs to test their medicinal value, and is assumed to be the author of Shen-nung pen ts’ao ching (Divine Husbandman’s Materia Medica), the earliest extant Chinese pharmacopoeia. This text includes 365 medicines derived from minerals, plants, and animals. Shen Nung is venerated as the Father of Chinese medicine. He is believed to have introduced the technique of acupuncture.

For centuries in China, monks and herbalists studied plants for their healing properties, and handed down their knowledge to the next generation by verbal instruction. There is also a tale that tells of an ancient Chinese herbalist who knew 100,000 healing properties of herbs, and began to pass his wisdom on to his son. The herbalist taught his son 80,000 secrets, but fell ill before he could complete his lessons.  On his deathbed, the herbalist told his son to come to his grave 5 years from the date of his death, and there he would find the other 20,000 secrets.  On the 5th year, the obedient son went to his father’s grave, and found, growing on the site, the tea shrub, Camellia sinensis. 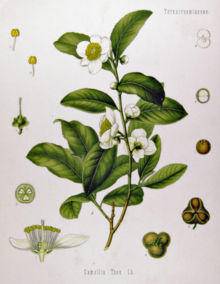 When Japanese Monks traveled to China to study with Buddhist monks there around the 7th century, they returned home with seedlings of the tea bush as parting gifts.  Today, Japan specializes in the production of green tea, which has become its national beverage. The tea plant is now cultivated throughout the world.  Along with China andJapan, plantations or tea estates in India, Sri Lanka (formerly Ceylon), which is the world’s premier source of tea, Taiwan, Africa, and Indonesia produce most of the world’s tea.

Tea was such precious cargo in its early years of import to Europe around 1600 that it was reserved for royal tables or tea tasting parties of the wealthy.  The price could exceed $100 per pound and one can only imagine what that would equate to in today’s dollar!  One of the earliest tea parties on record in America was held in 1674 in the Dutch colony of New York.  To taste the newly imported beverage, society ladies would arrive in their best dresses and carry their own teacups.

A hundred years later, the Sons of Liberty brewed up the most memorable tea party of them all.  In 1773, Americans had independence on their minds, and Britain’s prohibitive taxes on tea sparked a revolution.  Thirty-two cases of expensive tea were tossed into the Boston Harbor on the night that has become known as the Boston Tea Party.  So, one could say that tea was responsible for the very birth of a nation!

The tea bush has a prominent place throughout global history, and has only gained in popularity along the way.  Today, tea is the most highly consumed beverage in the world, second only to water.  A pretty powerful claim for an ordinary shrub!  By the way, iced tea, currently a very popular beverage, had its popular beginnings in 1904 during a heat wave at the St Louis World’s Fair.  A tea vendor decided to cut his losses by throwing the tea over ice and giving it away.  Today, iced tea has become so popular that it is even served in fast food restaurants.